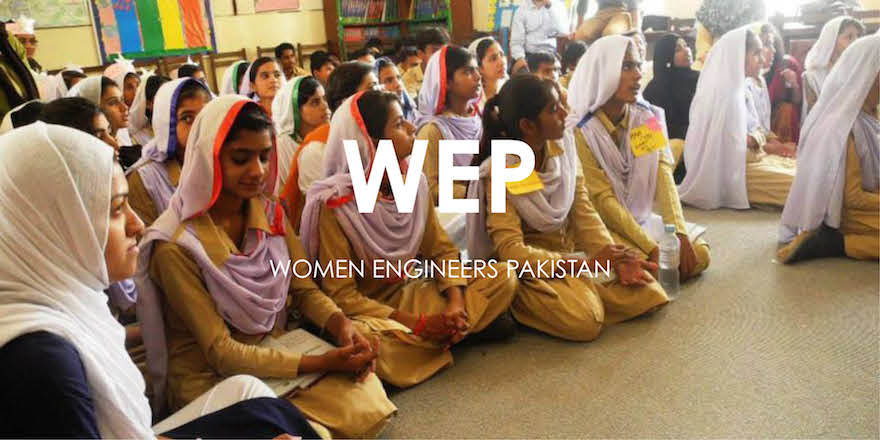 A few months ago, I was contacted by an organization called Women Engineers Pakistan, which introduces girls to the field of engineering and technology. Just reading the name made me curious. For those of you who don’t know, I’m an architect, and I come from a family full of engineers and tech-heads. In other words, my choice of becoming an architect has never, at any point of my life, ever been questioned. I went to a technical high school in Uppsala, Sweden, always with the support of mom and dad, brothers and sister, my grandmother, aunts, uncle and most of all my wonderful grandfather. With 26 boys and 5 girls in my class, the male-to-female ratio was rather high, but my knowledge and competence was never questioned by anyone of the male gender. Not by teachers, nor by fellow students.

Hearing about an organization like this and its origins was inspiring, and it takes more then a bit of willpower and skin on the nose (Swedish expression) to start something as groundbreaking and controversial in a country where female students are told that they should reconsider their choice to study engineering and start studying something more suitable for women…

In this interview, I’ve had the great pleasure of talking directly with Ramla Quershi, the co-founder of Women Engineers Pakistan. She recently moved to the U.S. to study engineering on a full Fullbright scholarship. So even though she’s busy with the big move and getting her bearings, she set aside some time for this interview. I hope you get as inspired by reading this as I did from writing it.

Core77: Tell us a bit about the organisation and the thoughts behind it.

Ramla Quershi: The organization is a budding startup, which looks to increase participation from Pakistani women in Pakistan in engineering. Women have always been by and large in domestic and agricultural jobs in Pakistan, and their participation in science and technology has been minimal. We realize that women make over half the Pakistani population and we’re working to prevent that potential talent for technical prowess from going to waste. We’re working with young girls at high schools to encourage them towards science and math

When did you start working on getting Women Engineers Pakistan up and running?

It started with a Facebook page last August. But it’s wasn’t until six months ago that we started working as an organization.

Why did you decide on starting WEP?

Throughout my engineering degree, I felt a nagging lack of women in this field. We were often discouraged by our professors that engineering is a ‘big boy’ area. It was disheartening to realize that there weren’t many role models set out for us. So I created this organization to give women engineers a platform to represent themselves.

When the professors talked about it being a “big boy” profession, how did your fellow male students react to those sort of comments?

My fellow males knew that I was good at my studies, so they would often turn up for a group study option and ask me to explain things to them. So they had found out that the women in their class were just as good (some even better) engineers. Barring a few, many were courteous and encouraging. However, there were some ‘go make a sandwich’ sort of comments—but not many.

There must have been many ideas/incentives to make it go from an concept into reality, what were they?

Oh yes, there were. Initially it was just a Facebook page, but then it started getting attention, and I realized that I had hit a niche. We were contacted by the U.S. Embassy through the Facebook page for meeting with a NASA engineer coming to Pakistan. And i thought, ‘Oh wow, not much representation for the women in engineering crowd.’

Being contacted by the U.S. Embassy and meeting an engineer from NASA is a rather big deal, what did you talk about?

What was the most inspiring part of her visit for you personally?

The fact that she had a focused goal, and that she kept working on it for so long to finally achieve it.

In which sections of your life are you implementing this philosophy?

In every part of it—work, education, personal life. I’ve realized that nothing worthwhile comes easy, you have to work tirelessly to achieve it. Which is why I have started a focused approach for the growth of my organization, Women Engineers Pakistan.

What are the plans for WEP in the near future?

That we start from school levels, then college and then target workplaces. I have learned that this change that I want cannot be brought about in just a couple of months. It wil take years, maybe decades, to set back this gender gap. And we’re going one step at a time.

Do you already have partner schools that wants to implement WEP into their curriculum?

No, not yet. The schooling system in Pakistan hasn’t changed much over the years. Devising the curriculum is much easier than actually implementing it. I have received both good and bad feedback from schools in Pakistan. The Gov’t Girls High school in Lahore has been most encouraging and have shown a lot of interest in the cause of promoting science and technology. I have gone to that school a couple of times and WEP will arrange a science competition for them next Spring term. However, curriculum changes are a huge challenge.

What is the biggest challenge when it comes to the curriculum?

This curriculum was set even before my parents went to school. So the education department is hesitant in changing it now. So I need help from the international community to set up a well-rounded curriculum with a special focus on the female audience to it.

Is WEP getting any help from bigger organizations as to make this happen?

For curriculum changes? No. But we’re getting a lot of help from organizations to set up events, set up promotion desks etc. The Mehran University of Engineering & Technology is one such example. They invited us over for sessions, they invited us as a guest speaker to seminars like Opportunity Deck for Women in Engineering, they have really helped us in spreading the cause.

You just got a scholarship as to study over in the U.S., tell us a bit about this.

Yes, I got a Fulbright scholarship to the U.S. It is a fully-funded one that enables me to do my best in education and at the same time be a part of creating a better impact in society. Fulbright scholarships are not easy to get, so there are a lot of expectations associated with the grantee once he or she scores one. I realize this is a golden opportunity for me to take my initiative for women engineers to the next level, forge contacts, raise internships, meet and invite new people to promote the cause, and I am trying to make the most of it.

What will you be studying?

I will be in U.S. for two years studying Structural Engineering with a focus on Performance-based design for earthquakes and other hazards.

Who runs WEP while you’re in the US?

I was hoping you would come to this. I have recruited Campus Ambassadors in major Engineering Universities in Pakistan. The role of these ambassadors is to carry forwad my work while I’m here. They will go to government schools for girls, they will go to colleges, they will arrange conferences in universities. I make the announcement for the selected candidates next week when session starts in Pakistan. Also, supervision is undertaken by Abdul Hadee Janjua, our co-founder. Rafay Qureshi keeps important contacts such as yourself in the loop. Ms. Sidra Kaleem works in Abu Dhabi for us, and she’s already doing a phenomenal job at representation for WEP at coferences there. She is trying to build a job market for Pakistani women engineers in the UAE.

Meanwhile, I am in constant virtual contact with everybody. Google hangouts, Skype and Facebook/Twitter are important in today’s digital age.

Is there anything else you wish i come to regarding questions..? ;-)

Yes. I am calling for international help here. We need growth. We need role models. We need jobs. Women in Pakistan are extremely talented. They are intelligent entities who are willful of changing the world for better. I call for global opportunities for these people. If someone feels they can help us in the tiniest possible way, let them not stay back. From science books to science fairs, anything and everything is welcome.

Do you have any Do’s and Don’t’s for girls and ladies who want to work within the field of technology and engineering?

Do:
– Step up
– Always be in learning mode
– Women generally are better multi taskers. Put this quality to good use.
– Repeat 1–3 daily.

Don’t:
– Give up.
– Settle for just anything. The world is huge. And anything will be yours if you keep trying your best
– Be scared of math/physics. Learn things the way you like, but maths is easy once you rid yourself of the fear of it.
– Think engineering is only for boys. An engineer uses his/her mind. So can you.

That they should step up for a new thing daily. Enginerring is an art form in a logical format. Until women start putting their ideas into it, engineering will lack the diversity it needs.